The Tilly Report: From 8 Weeks to 9 Months Old
Vote! And bid!

Charles Tan is currently conducting a series of interviews with all of the authors in our new anthology, The Beastly Bride: Tales of  the Animal People -- providing an interesting behind-the-scenes look at the mythic-fiction-writing and anthology-making process. He's posting them sequentially over at SF Signal. The first three interviews are online now:

An interview with Jane Yolen ("The Elephant's Bride")

An interview with Jeffrey Ford ("Ganesha")

"I'd been researching [Ganesha, the Indian trickster god,] for a while, thinking about writing a story about him but never really feeling like I'd gotten to the bottom of things. While I was looking into this stuff, I had a student in my writing class, an older guy. He was a retired doctor who'd been born and raised in India. He was a good guy, had a great sense of humor. We used to talk after class a lot. One day I asked him about Ganesha. He knew a lot about the God and pointed out certain authentic texts on the internet about him. He also had some cool ideas about Ganesha's significance in the modern world. At the end of the semester, after the last class, I asked him what he thought about my writing the story. He didn't say anything for a while, but eventually he said, "If you write it with an open heart, Ganesha will accept it." In the moment, I thought, "Solid," but on the drive home that day a question slowly dawned on me, namely, "What the hell did he mean by 'an open heart'?" I never saw the doctor again, but I thought about his statement for a long time before I could write the story."

I'll post links to the rest of the interviews as they're published. Stay tuned.

Beastly Bride art above by Charles Vess; below: Ganesha statue 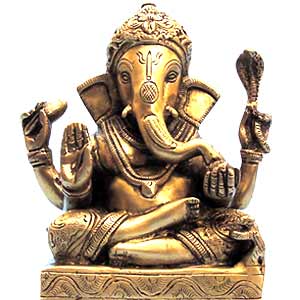 in Animals, Books, On writing, The Beastly Bride | Permalink | Comments (0)