Recommended Reading:
Reaching for the Light 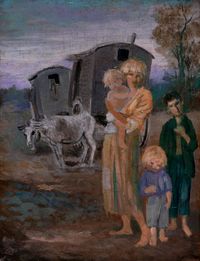 For more about Romany Gypsy life and lore, visit the Travellers' Times website,  Romany Road (The Gypsy Lore Society's site), and The European Roma Rights Centre. "The Road That Has No End," my 1997 article on Gypsy folklore (in the JoMA archives), is a little dated, but contains some good book recommendations.  I particularly recommend We Borrow the Earth, Patrick Jasper Lee's book on the Gypsy shamanic tradition.

The painting here is by the Welsh artist Augustus John (Gwen John's more famous brother, 1878-1961 ), who was obsessed with Gypsy life. He spent a lot of time with Romany friends in England and on the Continent, spoke the Romany language, and liked to live and travel in gypsy-style himself, often trailing his extended family behind him. His son Pyramus was born in a Gypsy caravan here on Dartmoor, not far from where I live. (John himself wasn't actually there at the time, and his imperturable mistress Dorelia MacNeil gave birth to the child alone.)

For some great Gypsy music (rather than Gadjo tunes about Gypsies), I particularly love Balkan Beat Box and Gogol Bordello. Also, check out The London Gypsy Orchestra, which (as Rima Staines notes in the Comments below) is dedicated to Gypsy music, though it's not an all-Gypsy group.

Excellent post Terri... sorry to have missed that gig last week!
Oddly I have a gypsy related post up my sleeve too... Didn't know about Augustus John's son being born here - Augustus' drawings are incredible but I find his sister Gwen a better painter altogether.
And as for the marvellous London Gypsy Orchestra - of which I was a member (and illustrator!) for a few years - the make up of the membership is very international but predominantly gadjo - when I played with them, one or two members had some Romany ancestry I think. But we all shared a strong love for the music :)
Opa!
x

Wonderful, wonderful music! I've loved the 'Raggle Taggle Gypsies' since I heard Christy Moore do a version of it here in concert years ago. Great song and this is a great rendition of it. The Ewan McColl song is gorgeous, not surprising I guess as he wrote so many wonderful songs, but this is a particularly beautiful version. And June Tabor is a Queen, I love how passionate and damned angry she is at the beginning of the video, a woman to be reckoned with. She is one of my favourite singers. Have you heard her sing with Maddy Prior? Amazing!

Now, is it just me, or does the first portrait of Dorelia MacNeil in the NPG website look a little like...Rima?! Now I've heard a snippet of the LGO, I'll be listening to some more!

There is a family story that one of my convict ancestors was a gypsy. She was 16 when she was transported out here, and apparently she had very long black hair and was the tallest woman on the ship! Her name was Mary Marjoram, but that's about all we know about her. The story is probably just that, a story, but who knows!

Dammit, there are far too many exclamation marks in this comment.........!

So much wonderful music and wonderful links - I've been having fun popping back and forth. Thank you!

Thank god (*ess) I can count on you to lift my city soaked spirit.
Today my hands shake.
My whole body is vibrating annoyingly.
A thin film over my eyes obscures reality.
There are no words adequate.
The children call to one another below,
as though the world were all their game.
This gaming post peters out of inspiration.
I'm hungry-
the hallmark of human being,
to be hungry, shaky,
seriously exhausted at midday.

The wonderful Topic Records released a CD called " My Father is the King of the Gypsies" as part of their Voice of The People series a couple of years back. Highly recommended. http://www.topicrecords.co.uk/?p=306

Like I wrote earlier, your posts uplift & inspire me, so I just posted you as the feature for tomorrow. I want to share the good fortune, There's also a favorite current Peggy Seeger tune to hook up with that wonderful Ewan MacColl you posted. http//mscomfortzone.blogspot.com.

Thank you for these great links, Michelle and Steve. And everyone else for your comments.

I so appreciated this post. The 8th was International Roma Day. On the 4th I was lucky to get free tickets to a private Gogol Bordello concert in small club and make my way thru the mosh pit to hear them from the stage's edge (pretty good for my age).
I have followed this blog and all your beautiful work - I knew you in Yellow Springs many years ago and am sorry we lost touch. I remember talking with you about Jan Yoors book while eating good food and listening to good music at the farmhouse. I've shared your exquisite website with lots of folks. What always amazes me is that we still have many parallel interests and passions, even musically. I am glad you have led such a rich life following your path so truly and sharing with so many.
Here is what I posted on FB this week:
An urgent petition to prevent anti-Roma violence: http://www.ipetitions.com/petition/errc/
A recent Gogol Bordello video of Break the Spell. The video is a protest of the current problems: https://www.youtube.com/watch?feature=player_embedded&v=Gr73BSUeegY#at=13
And I think you will enjoy this piece by my favorite Roma violinist Nicolea Neacsu (I was blessed to hear him live once) playing a most expressive piece of music from the movie Latcho Drom: http://www.youtube.com/watch?v=wS-_W-dOYeo&feature=related About Nicolea: http://www.guardian.co.uk/news/2002/sep/16/guardianobituaries.arts
Hope you are healing well sister - the world needs you.