Growing into your work
Among the flowers 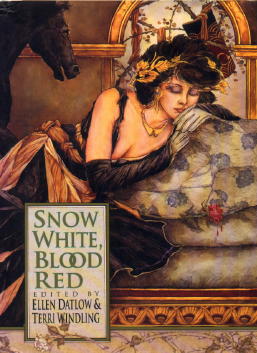 Ellen Datlow just alerted me to an interesting article published in The Guardian on June 29. It seems that a story from our Snow White, Blood Red anthology (a collection of re-told fairy tales for adult readers) has been denounced in the state-owned al-Akhbar newspaper in Egypt. Gracious! That's a first for us.

The offending story is Tanith Lee's "Snow-drop," an Angela-Carter-esque retelling of Snow White.

"It was on the reading list of a fantasy fiction course offered to final-year students during the first term of this academic year, 2010-2011," says The Guardian. "The short story, according to the al-Akhbar journalist, teaches nothing but depravity and moral degradation. It encourages perversion and is therefore 'a crime in the full sense of the word'. Brandishing his moral sword, he threatened to file a complaint of moral corruption to the public prosecutor and to sue all those involved in allowing this short story to corrupt innocent minds."

The power of fairy tales indeed.

Deary me! The power of words!

Living in Saudi Arabia, I'm used to the mentality of the people here in the Middle East, but it never ceases to leave me speechless and in disbelief. It's like they come up with new things to ban or denounce every week. One of the most hilarious fatwas, which was even on the news because it was so silly, was that Mickey Mouse must die. Um, how do you kill a fictional character and why would you want to, anyway? But to see this type of behavior in Egypt, which is a country more secular and open than the KSA is a bit unsettling. It's like things are moving backwards instead of forward, which is sad. I am a muslima and I am a HUGE fan of Miss Terri Windling's and Miss Ellen Datlow's edited anthologies. In fact, "The Fairy Reel" is one of my favorite books. I have found nothing offensive up to date.

Fairy Tales are just that, tales. They are stories meant to entertain and broaden the horizons of our imaginations. They let us get in touch with our inner child. Even the retold versions in anthologies for adults and young adults are purely for entertainment purposes and for those interested in fairy tales, mythology, and folklore. I believe that none of the short stories in these anthologies are meant to influence people in a negative manner, and I'm sure final year students in college or high school, for that matter, pretty much have their morals and ethics down and cannot be swayed from right to wrong or influenced in a negative way by a piece of fiction writing. If anything, it could teach them about some of the negative aspects of humanity and the world, so they can be prepared if they ever face a similar situation in real life. It can also introduce them to new ideas to explore and new ways of thinking about fairy tales instead of being stuck "inside the box."

Banning movies, books, etc., is pointless. Particularly in this day and age where people will always find ways to gain access to them anyway. I believe doing this will actually make banned or denounced things more desirable because it will peak the interest of some people and leave them wondering why they were banned in the first place. A good example of this is that there is now an escalating problem here with pirated movies because they are not a lot of options in stores, and those legally brought have a bunch of scenes cut from them.

My initial respond to this article was "WOW! That's INSANE," But now that I think more on the whole situation, it occurs to me that it is also sad.

Reem, thank you for your comment, and your insights on this.

Gosh, I hadn't heard about the Mickey Mouse fatwa!

Unfortunately, there will always be someone somewhere brandishing their "moral authority" like a sheriff's badge. They are the most myopic of creatures, barging through life with such a singular vision that they fail to participate in the world in a meaningful way.

The power of fairy tales indeed.

Interestingly for me personally is that I remember that story, and it was my favorite in that collection. It made my run out and hunt up more things by Tanith Lee.

Wow. That is very interesting. A person must have a very hyper-permeable mind to be led down the road of "degradation" and "perversion" by a short story...a fairy-tale short story, none-the-less.

I suppose there is no such thing as bad publicity??? Maybe book sales in Egypt will skyrocket after this. Everyone will want to know what the fuss is about.