Into the Woods, 35: Fairy Blessings 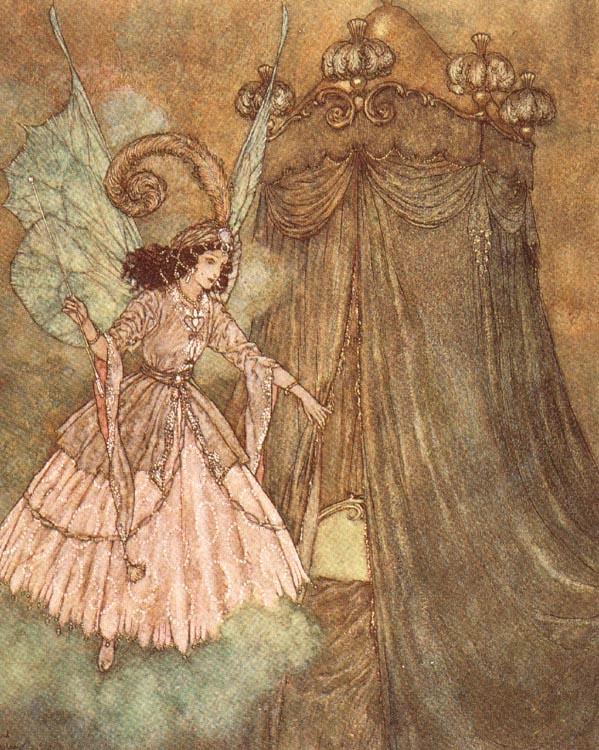 From About the Sleeping Beauty by P.L. Travers:

"Are there thirteen Wise Women at every christening? I think it very likely. I think, too, that whatever gifts they give are over and above those that life offers. If it is beauty it is of some supplementary kind that is not dependent on fine eyes and a perfect nose, though it may include these features. If it is wealth, 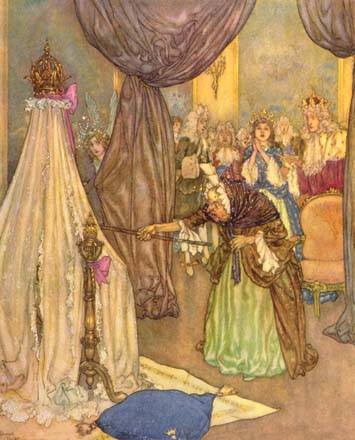 it comes from some inner abundance that has no relation to pearls and rubies, though the lucky ones may get these too.

"I shall never know which good lady it was who, at my own christening, gave me the everlasting gift, spotless amid all spotted joys, of love for the fairy tale. It began in me quite early, before there was any separation between myself and the world. Eve's apple had not yet been eaten; every bird had an emperor to sing to and any passing beetle or ant might be a prince in disguise....

"Perhaps we are born knowing the tales, for our grandmothers and all their ancestral kin continually run about in our blood repeating them endlessly, and the shock they give us when we first hear them is not of surprise but of recognition. Things long unknowingly known have suddenly been remembered. Later, like streams, they run underground. For a while they disappear and we lose them. We are busy, instead, with our personal myth in which the real is turned to dream and the dream becomes the real. Sifting this is a long process. It may perhaps take a lifetime and the few who come around to the tales again are those who are in luck." 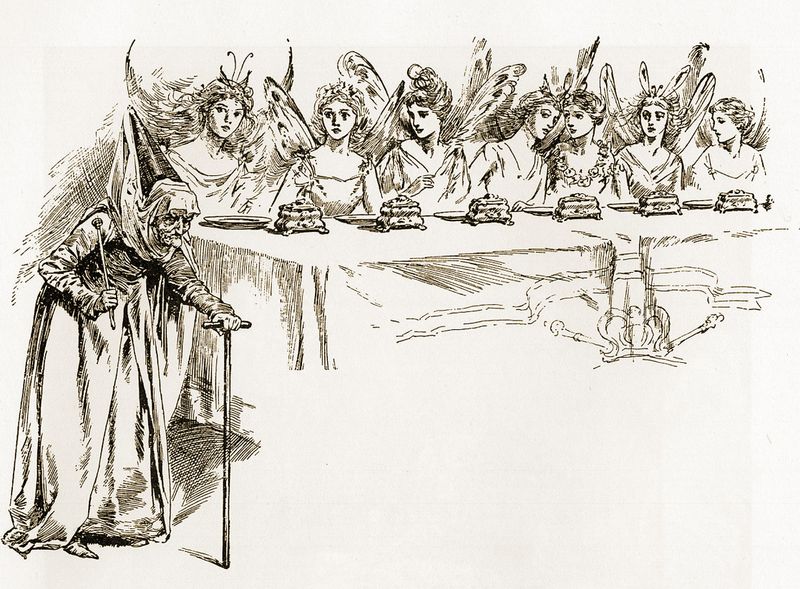 There were twelve fairies at the feast. Never
Thirteen. The day the queen gave birth, the king

Sent out twelve messengers on horses,
One to each of us, begging us
To bless her, name her, crown her with our favor.
So we came.

There was a banquet — well, there'd have to be,
With jewelled plates and cups, the usual fee
For fairy-godmothering. My sisters returned
The usual gifts: Beauty. Wit. A lovely voice.
Goodness (of course). Good taste (that was Martha,
Wincing at the jewelled cups, the queen's gown).
Grace. Patience. An ear for music. Dexterity
(To help her learn Princessly skills, as sewing
Dancing, playing the lute). Amiability.
Intelligence.
I meant to give her a long life.
I raised my wand and caught her eyes. They were
Gray and awake. Her cheeks were flushed with pink,
Her hair transparent down. She batted at
My wand and laughed. The court transfixed me
With expectant eyes — the king and queen,
My sisters, ladies, nobles, serving men,
Waiting for my gift. I considered
Her life, her marriage to a prince raised
Blind to the world behind the jewelled cups,
And said, "Sweet child, I give your life to you
To lead as you will, to go or stay, to use
My sisters' gifts, or let them be. Rule
In your own right, consortless and free.
If you choose."

The king raged; the queen wept; my sisters
Stood aghast. Not marry? The kiss of death,
A harsher curse than marriage to a frog,
Or kissing a hedgehog, or serving a witch, or even
Herding geese, since all these led to mating.
As a good fairy, I did what I could; I gave her
A hundred years' sleep, a hedge of briars, a spell
That would sort her suitors, test them for grace,
For patience, for wit and intelligence and good taste,
For amiability and a lovely voice.
A man who would be her mate,
Not her master. 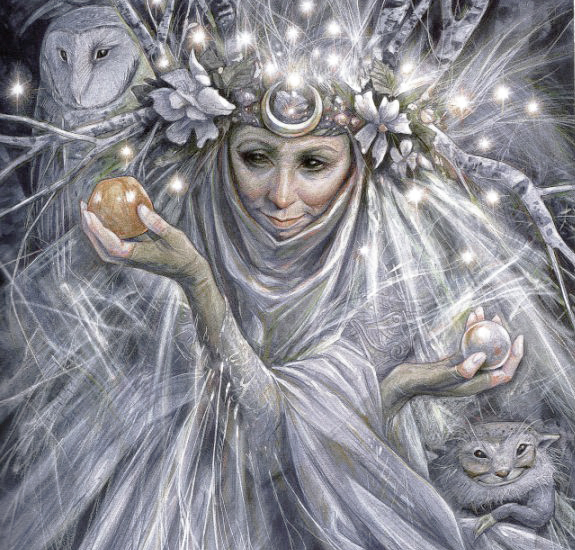 Images above: Two fairies by Edmund Dulac (French, 1882-1953), "Places Were Set for Twelve Fairies" from The Ideal Fairy Tales, artist unknown; "Sleeping Beauty" from The Nursery Picture Book, artist unknown; "Sleeping Beauty" by Margaret Tarrant (English, 1888-1959); "A Spray of Hemlock" by Jessie Marion King (Scottish, 1875-1949); and "The Faery Godmother" by Brian Froud (English, contemporary). The poem is copyright 1999 by Delia Sherman, and has appeared in Silver Birch, Blood Moon (Datlow & Windling, eds.) and The Journal of Mythic Arts.

in Fairy tales, Into the Woods series | Permalink | Comments (9)

I love this: 'Perhaps we are born knowing the tales, for our grandmothers and all their ancestral kin continually run about in our blood repeating them endlessly, and the shock they give us when we first hear them is not of surprise but of recognition.'

Delia's poem is so perfect, I will not dare post one of my own here without weeks of revision.

And I will tell her so on Sept 22 at the Brooklyn Book Fair where she's moderating a panel I'm on.

I, too, love the idea that we are born with the tales - and our grandmothers - running around in our blood repeating them. And Delia's poem, love it!

Jane, you make me blush rose red, because you've got poetry in your blood and me--well, sometimes the poetry fairy visits me, then takes off again for years, the hussy.

What I do have in my blood is fairy tales, however, from the time I was very little. She's absolutely right about that moment of recognition--"These are MY stories, this is how I see the world."

Where else could I sit to read these things! Love the poem by Delia and love how the grandmothers-fairies-'aumakua tell their stories across time, transversing bloodlines to appear in just the right places. Here for one.

Shall I spin you a tale
out of cobwebs, she said,
nettles, flax, straw?
She bent towards me
like a used car salesman,
and I wasn’t about to buy
what she had to sell.
It was all moonshine
she was talking,
all folderol, furbelows,
a good helping of fools.
I draw a deep breath,
Words, I tell her,
words will have to do.
She laughs. No one spins
with words, she says,
those are just yarns.
But try dandelion fluff,
wood pith, the long hairs
from the hind end of a tiger;
hard to gather that one.
Try spinning the tale
from what sheep leave
on any large boulder
on the north side of a mountain.

But she was talking magic,
the deep mysteries,
best left to soothsayers,
priests, the old odd poet.
That’s not for folks who
want to hear the true
like me, like--I guess--you.

Fortunately, poetry and magic are not competitive. Oh there are prizes and contests but
in the endless twine they are woven together until they trail off like the lighted way of the
night sky.

Or as my grandson says, it's all good.

I want them both -- the deep mysteries and the true. Or perhaps to live on the threshold between them. A dangerous place sometimes....

I love this poem.