The Storyteller's Art
Creativity and play 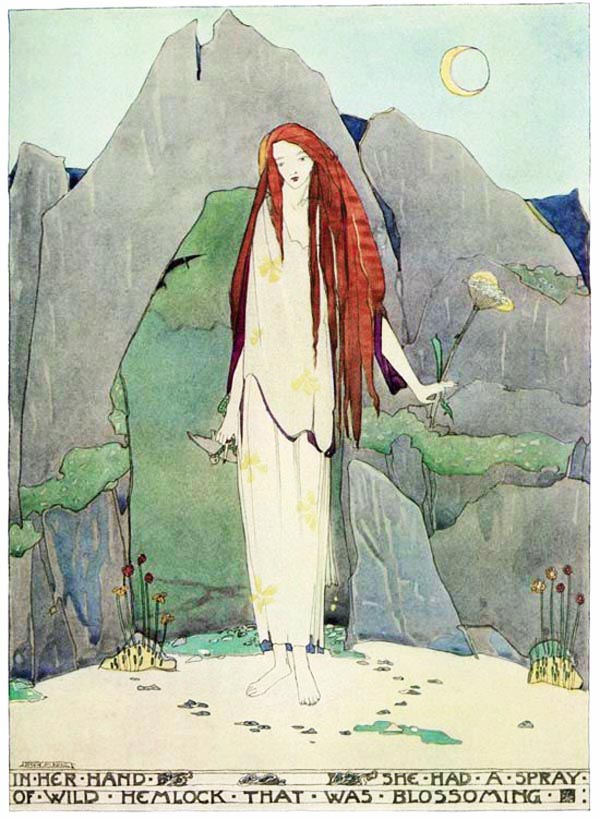 From "The Fantastic Imagination" by George Macdonald (1824-1905), author of  The Princess and Curdie, At the Back of the North Wind, The Light Princess, etc., discussing the nature and value of fairy tales and fantasy:

"A genuine work of art must mean many things; the truer its art, the more things it will mean. If my drawing, [for example], is so far from being a work of art that it needs This is a horse written under it, what can it matter that neither you nor your child should know what it means? It is there not so much to convey a meaning as to wake a meaning. If it does not even wake an interest, throw it aside. A meaning may be there, but it is not for you. If, again, you do not know a horse when you see it, the name written under it will not serve you much. At all events, the business of the painter is not to teach zoology.

"But indeed, your children are not likely to trouble you about meaning. They will find what they are capable of finding, and more would be too much. For my part, I do not write for children, but for the childlike, whether of five, or fifty, or seventy-five. 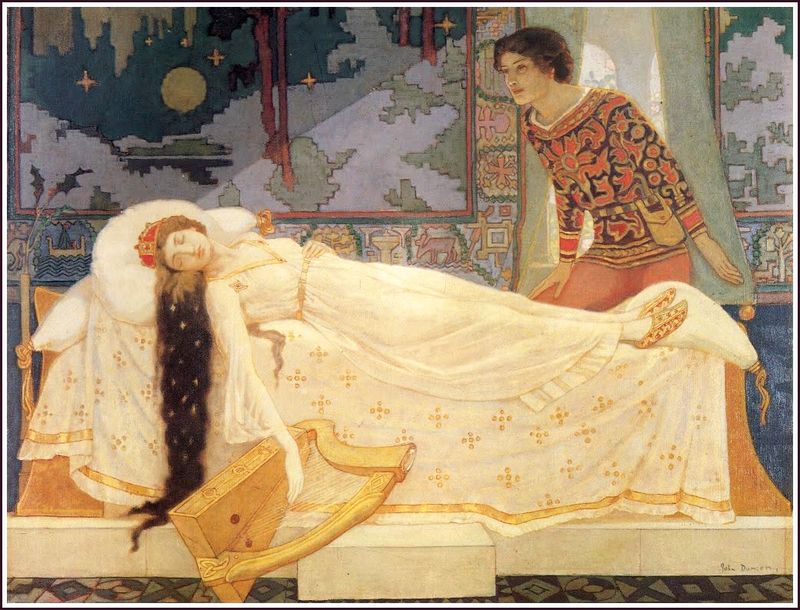 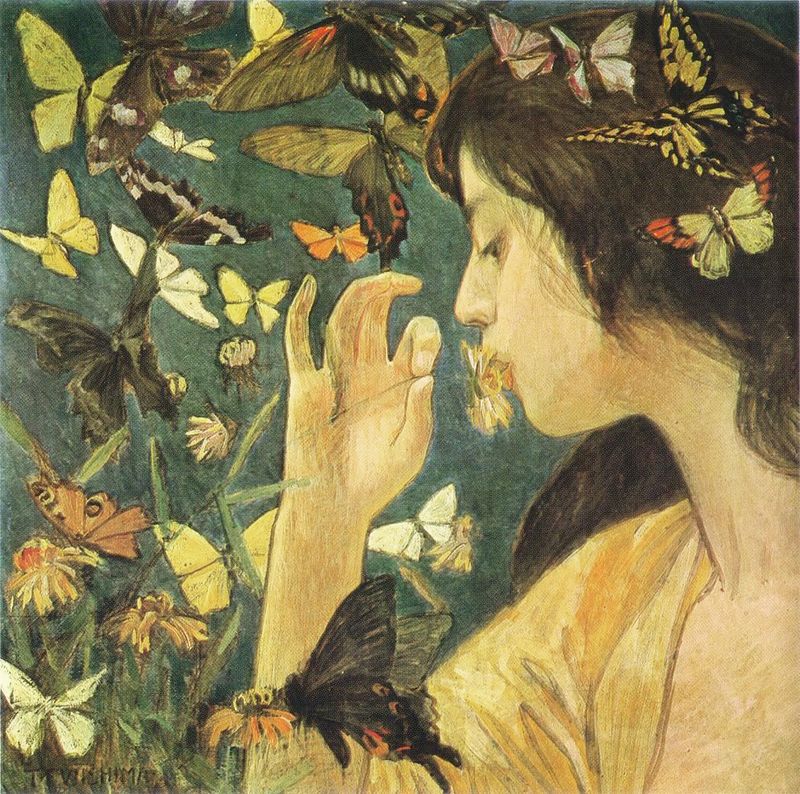 "The true fairy tale, to my mind, is like the sonata. We all know that a sonata means something; and where there is the faculty of talking with suitable vagueness, and choosing metaphor sufficiently loose, mind may approach mind, in the interpretation of a sonata, with a more or less contenting conciousness of sympathy. But if two or three men sat down to write each what the sonata meant to him, what approximation to a definite idea would be the result? Little enough -- and that little more than needful." 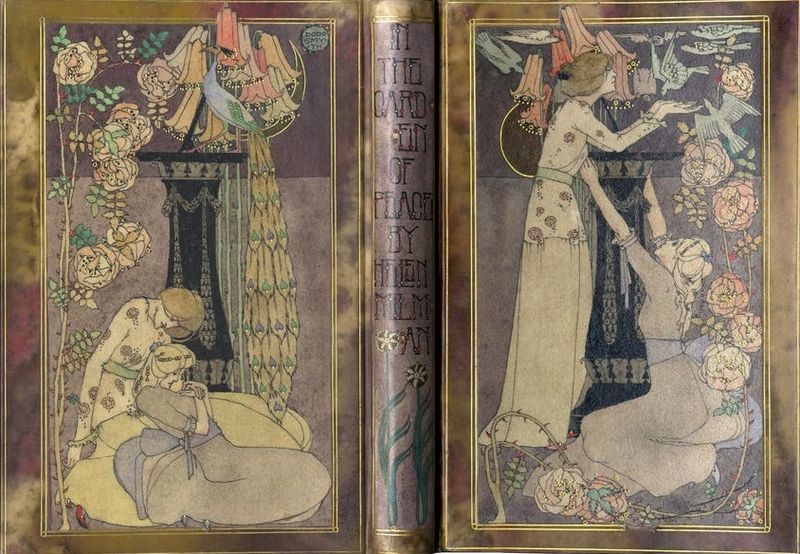 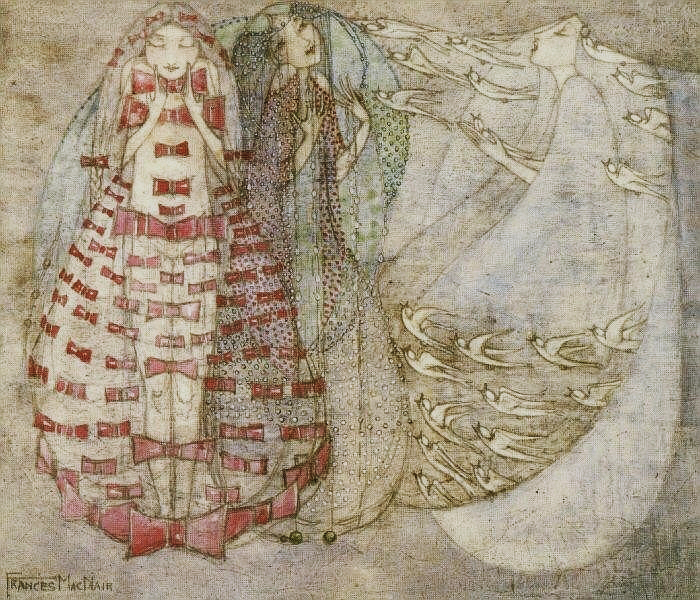 " A fairy tale, a sonata, a gathering storm, a limitless night, seizes you and sweeps you away: do you begin at once to wrestle with it and ask whence its power over you, wither it is carrying you? The law of each is in the mind of its composer; that law makes one man feel this way, another man feel that way. To one the sonata is a world of odour and beauty, to another of soothing only and sweetness. To one the cloudy rendezvous is a 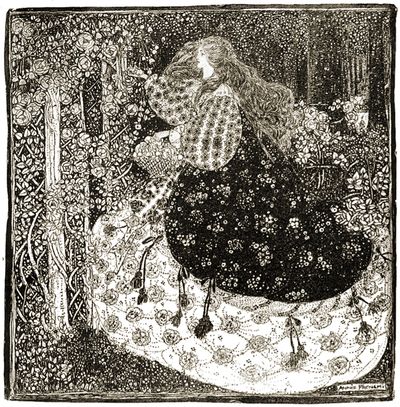 wild dance, with a terror at its heart; to another a majestic march of heavenly hosts, with Truth in their center pointing their course, but as yet restraining her voice. The greatest forces lie in the region of the uncomprehended.

"I will go farther -- The best thing you can do for your fellow, next to rousing his conscience, is -- not to give him things to think about, but to wake things up that are in him; or say, to make him think things through for himself. The best Nature does for us is to work in us such moods in which thoughts of high import arise. Does any aspect of Nature wake but one thought? Does she ever suggest only one definite thing? Does she make any two men in the same place at the same moment think the same thing? Is she therefore a failure, because she is not definite? Is it nothing that she does rouses  the something deeper than understanding -- the power that underlies thoughts? Does she not set feeling, and so thinking at work? Would it be better that she did this after one fashion, and not after many fashions? 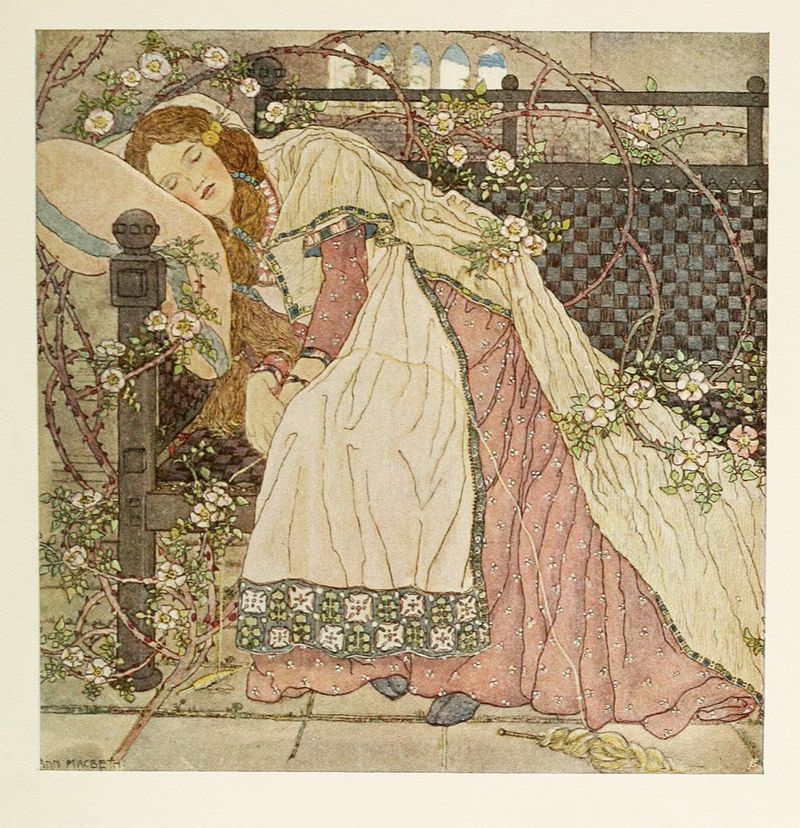 The author and artists selected for this post all come from Scotland -- in honor of today's historic referendum on the question of Scottish Independence. 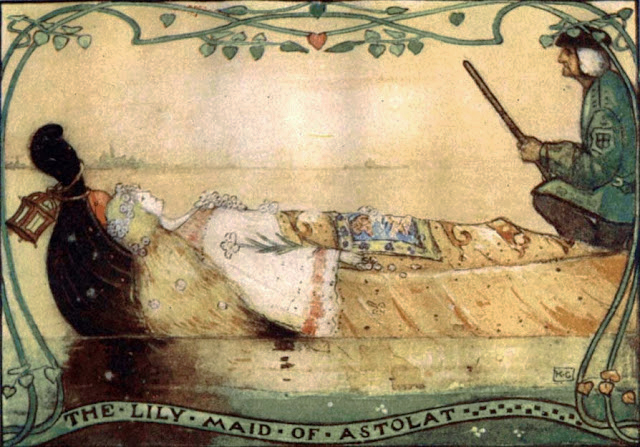 I love the Scottish illustrators and the women of the Scottish Arts and Crafts movement. Actually own a small decorative piece by Traquair which I love. If I could I would collect more.

Thabk you very much - I always find delight and learning - with every visit.

You introduced me to Traquair's work, for which I am forever grateful.

I'd forgotten that. Did we go to the Edinburgh exhibition and the church with her paintings or did I just talk about her to you? I have a couple of small Annie French illustrated books in Scotland as well.

We went to the exhibition. A revelation.

That final quote! Makes me think about the strange divide between what is "natural" and what is "man-made". We are 'of nature', though less, perhaps, than we once were. Still, what we make with our hands and minds, these objects and stories can certainly be natural in their own way. Thank you, Terri.

The art work here is so beautiful! I love the work of Phoebe Traquair particularly. In some of her pictures I think it's possible to detect the influence of Evelyn Demorgan, another favourite artist of mine. I've often wondered if they ever met.

And of course the Scottish theme is so appropriate on this day when the links between Scotland and the rest of the countries and territories on this small collection of islands, may finally be severed. (Not including Eire of course, they went their own way long ago) Huge good luck to Scotland whatever they decide to do.

What a glorious tribute to the Scots' rich culture on a day when such a vote is happening!

And I appreciate the reminder that "The best thing you can do for your fellow, next to rousing his conscience, is -- not to give him things to think about, but to wake things up that are in him; or say, to make him think things through for himself."

As ever, I am enriched by my visit here. Thank you, Teri!

I do not know what I would be like now if I had not read George Macdonald's "Princess and..." books,
when I was eleven. I was confounded by stories with princesses who were not adventurous. Here was my kind of princess. I decided to write stories with magic, adventure, kindness and brave girls and women like this.

Yes Candace, what you said is just enough. To the Scots', the quote, and Teri.

I love, absolutely love these drawings and this perspective by George MacDonald. Sometimes, the storytellers hanging out in the marketplace, the quaint pub/shop. the old house or railway station are the objects, themselves. Antiques that offer through artistic detail, inscriptions, place of discovery or some knowledge of their personal lineage, the vestiges of a story. And the rest is either revealed through research or the beholder/owner's imagination. The inanimate trouvère, on one hand hints at its tale in silence, but on the other, inspires the observer to complete or reinvent its history.

To wake things up that are in him..
George Macdonald

There are centuries of us
silent and heirloomed -- left
in half-timbered shops, temple ruins,
the spider-veiled cellar or eaves. We are given
our song by use or scene. By those

who shadow the vase, linens, lamp,
ink well, parchment, or book.
And oh yes, that powder horn found
in the barn's loft, abandoned
with blonde strands of hair
clinging to its strap. Goshawk wings
sketched along its sallow bone. What woman
shot a firearm and why --
or did she simply fill the thing
to save her husband time?

The tale remains sparse, spoken
through etching, wisp and place.
The rest revealed
by hand and eye that mold
its shape into a chapter.
Whatever scenario
gives the relic a relatable
air, an intimate ghost.

Your poem captures the appeal of old objects and old houses for me, each with their stories ... if only we could hear them.

I lived for many years in a 16th century cottage, where the ghosts of the past were a palpable presence. Even the modest house we're in now -- a "working man's cottage" from 1919 (part of the Homes for Heroes program after World War I and a Council House in the pre-Thatcher era) -- has its own rich history, its secrets, its stories. My family's story becomes part of its tale; and we add to it, season by season.

Thanks so much Terri

For reading and my poem and sharing your wonderful experience and impressions. Old houses and old places have a character of their own and what adds to that character are the spirits or presences that still inhabit the rooms, shadow the walls and pass over objects they used or touched in the past. Secrets remain and wait to be disclosed.

My cousins bought and old farm house in The Hudson Valley area of New York 25 years ago. They fixed it up and have lived there ever since along with its ghostly inhabitants. They have definitely felt the presence of a Civil war Soldier and a young girl who haunts certain rooms. They are not afraid but have simply learned to accept what remains part of the past and present. They do embrace it.

Again, thanks so much
My best
Wendy

I really can relate to you perspective here

" We are 'of nature', though less, perhaps, than we once were. Still, what we make with our hands and minds, these objects and stories can certainly be natural in their own way. "

and totally agree. There is a something organic and natural about the craftsmanship of art , whether done physically through sculpture, painting or other material crafts or whether expressed through thought, music/writing.
It is part of our human nature to create and to relate ourselves through what we create.

Thanks for sharing your POV.
Wendy

Yes, I agree with you. The princess or heroine character needs to be daring, to create or inspire the magic as well as being part of the magic's tale.

Lovely poem. Related to my almost three years in an old old house near Bend, Oregon.
It had secrets, a trapdoor in my bedroom nobody ever was brave enough to go down in,
a horse who waited patiently until I finally realized it wanted to show me a big hole and
underground cave inside a ring of trees. And the only time I learned to shoot both a rifled and a pistol, just because we were westerners. I did some damage to rusty cans, and never shot anything again.

Thank you so much for taking the time to read my poem and comment. What a fascinating experience you had on that homestead in Bend, Oregon!! I can only imagine you sense surprise and awe you when you found that cave inside a ring of trees. And of course that trapdoor in the bedroom. Old houses or any other antique structure have their character, their secrets and their ghosts. And from them, we find stories, they are silent story tellers and they allow us , perhaps, to become the oral ones. Anyway, I really appreciate you sharing this story with me.

Thank you for the prompt. It is wonderful to read and explore other memories and how we can make art about. I dislike competition. I love fellowship.

Another oops. Clumsy 'make art about....it? This? The somethingness of this?